A group of ringers, who are spending the weekend in this area, will ring the bells at St Peter's from 9.30am for an hour.

The group are members of the Welsh Colleges Guild, who are holding their AGM later in the day in Lichfield. They are touring a number of other churches in the area, including St Editha's Tamworth later in the day.
Posted by Bellringer John at 26.1.18 No comments:

Peal Board Now in Position

The peal board commemorating the first peal rung on the six bells has been mounted on the wall in the ringing room. Thanks go to Ray Kneale.

The board was painted by Maggie Willans of Bath was has produced many boards for churches in the UK.

I hope that this will be the first of many. 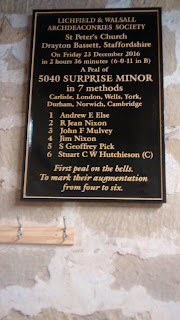 A peal board to commemorate the first peal on the bells on 23rd December 2016 has finally been completed. John Mulvey will collect it on 28th November. It has been hand painted by Maggie Willans of Bath. Maggie has produced such boards for churches all over the UK. She uses the same methods that have produced such commemorative boards for over the last two centuries. 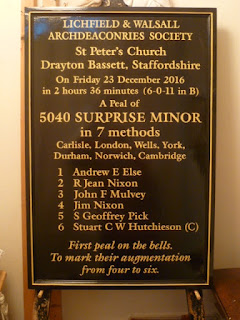 This will be hung on the wall in the ringing room after it has been displayed in the church.
Posted by Bellringer John at 20.11.17 No comments:

Half Muffled Ringing Over Remembrance Weekend

On Saturday 11th November the bells of St Peter's rang out half muffled to mark the 99th anniversary of the Armistice which ended the 1st world War. This quarter peal lasted 40 minutes and was the first for Kevin Jackson ringing an inside bell for the method.

On Sunday prior to the Remembrance Service at st Peter's the bells were rung half muffled by local ringers.

Many have told me how much they enjoyed the ringing on these two days.
Posted by Bellringer John at 20.11.17 No comments:

Peal For The New Parish

A peal lasting 2 hours 31 minutes was rung on the bells of St Peter's church on Tuesday, 5th September. This celebrated the creation of the new parish of Drayton Bassett and Fazeley with Mile Oak, that came into existence on 1st September.
Posted by Bellringer John at 8.9.17 No comments:

Bells to ring for Leavers' Service

The bells will ring out after the Manor School Leavers Service on Friday next, 21st July to wish the Year 6 pupils well as they move on in their education.

There is a special bond between the present Year 6 pupils of the Manor School and these bells. It was the Year 6 pupils who in April 2016 saw our three new bells cast at John Taylor's bellfoundry in Loughborough. They also came up to the church the morning in late September 2016,  when those same bells arrived in the village, to view the bells before they were hoisted up the tower.

It seems fitting that the bells should also ring out to wish them well for the next stage of their lives as they move onto secondary school.
Posted by Bellringer John at 17.7.17 No comments:

Last night finishing at 12.20am Simon Adams and I completed the installation of the electronic control panel and wiring for the chime bell. This means that the hour will chime out between 8am and 9pm over the village. The chimes will be silenced over night.

The mechanism will also allow the bell to chime out before and after services.

Another task completed!
Posted by Bellringer John at 5.7.17 No comments: 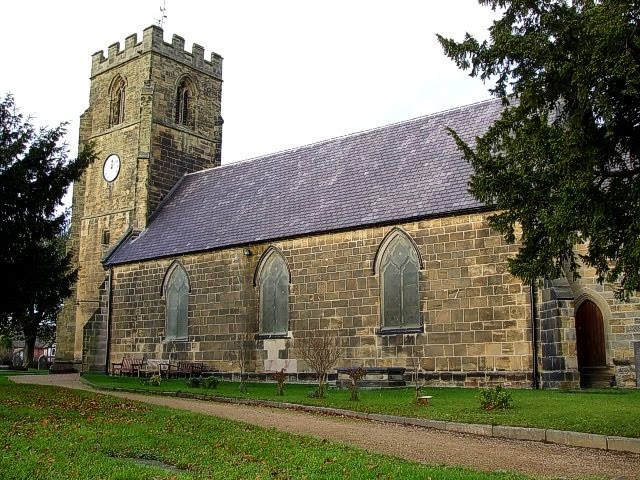 Get in touch online